At the height of the Space Race, the Saturn V propelled 13 missions into space. Here is the Apollo 6 soon after launch. (NASA)

At the height of the Space Race, the Saturn V propelled 13 missions into space. Here is the Apollo 6 soon after launch.

The Space Race: A Family Story

Elon Musk’s aerospace company, SpaceX, safely delivered four astronauts to the International Space Station on Nov. 16, launching the United States into a new era of space exploration. With commercial space travel, more trips to the moon and further missions to Mars on the bucket lists of NASA and its aerospace partners, “the Twenty-First Century Space Race” is shaping up to be the greatest interplanetary endeavor since the 1960s.

The original Space Race was ignited by President Kennedy’s iconic 1962 speech in which he declared that the US would put a man on the moon within the decade, among other things, “not because they are easy, but because they are hard.” Five years earlier, at the height of the Cold War, the Russians had launched the Sputnik satellite. It was clear that the moon was the next step, and the US was determined to get there first.

The Apollo Program, which famously succeeded in landing Neil Armstrong on the moon in 1969, spanned six years and 13 launches. At its helm were German engineers Wernher von Braun and Kurt Debus, who had developed the V-2 rocket during World War II at a secret lab in Peenemünde, a small town on the Baltic Sea. As the first long-range guided missile, the V-2 was used by the Nazis to decimate enemy cities, particularly London.

The rocket’s technology was groundbreaking—especially the “bang-bang” control system developed by Irmgard Flügge-Lotz, the first female engineering professor at Stanford. In a top-secret initiative known as Operation Paperclip, the US brought over 1,500 German scientists to the States to work on their behalf as the Cold War intensified, disregarding their Nazi affiliations and excusing them from the ongoing Nuremberg Trials.

After the war, von Braun and Debus settled into their new jobs at Kennedy Space Center at Cape Canaveral in Florida, evolving the technology from their V-2 into what would eventually become the basis for the largest rocket of all time, the one responsible for launching every Apollo mission: the Saturn V.

Taller than the Statue of Liberty at 363 feet and as powerful as 85 Hoover Dams, the Saturn V was an “engineering masterpiece,” according to William Lucas, former director of the George C. Marshall Space Flight Center. It consisted of three stages: the first (S-1C) lifted the rocket, the second (S-II) contained thrusters for increasing velocity after takeoff and the third (S-IVB) held switch engines to correct the rocket’s orbit in space.

At the top of the third stage was the Instrument Unit (IU), above which sat the Lunar Excursion Module with the Apollo Module where the astronauts lived. Many thought of the IU as the “queen” of the launch vehicle—the brains of the Saturn V while the first three stages were simply brawn. The IU’s focus was on guidance, telemetry and controlling the rocket from just before liftoff until the S-IVB was discarded in orbit. It was here, at 287 feet above the launch pad, that my grandfather had his office.

For the record, the height and doorless elevator terrified him. It was 1965 and my grandfather, Mark Elder, was 19 and an engineering student at Georgia Tech. It would be two years before the first Apollo mission launched. Still, NASA was hard at work performing test launches—“countdown demonstration tests”—where the rocket was fully fueled, taken through the countdown sequence all the way to ignition and then stopped just before liftoff. For each test, everything was treated as if a true launch would occur because “if something goes wrong and this bird [Saturn V] ignites, it’s going. It’s not gonna stay [on the launch pad].”

NASA—and IBM, which had been contracted to develop the IU—were in need of workers for the Apollo Program and my grandfather was in need of money to pay for college. He spent the summers at Kennedy Space Center, returning to school in the fall. “I was paid quite well,” he said, mostly because of the overtime pay he received from working long hours. The need for employees was so great that “I walked in the second week, and they kinda knew what my skills were, and I got promoted to engineer and they said, ‘this is your team’ and I had a team of technicians that reported to me… I told my boss I didn’t know anything about this space stuff and he said ‘none of us do,’ which was true.”

My grandfather’s team consisted of military veterans who had received basic electronics training at military-sponsored technical programs. At NASA, their education was furthered at schools where employees earned credentials for job-specific skills—Fuel School, Soldering School, Torquing School. All of them were older than my grandfather by years, had fought in World War II, had wives and children, but because he was on his way to becoming an engineer, my grandfather was their boss. This power dynamic was “a crazy thing,” and he found it difficult to overlook his crew’s military ranks and assert himself as their superior.

Thanks to the movie Hidden Figures, many are familiar with the incredible work of the mathematician Katherine Johnson. Her story was, unfortunately, an exception to the rule of NASA’s doors being closed to women and minorities, however qualified they were. “It was a very awful time in that regard,” my grandfather said. “These were the same days in which we had separate bathrooms and water fountains for ‘colored’ people. Schools were still segregated and the Black schools were not good.” My grandfather had a Black man on his crew that had been a major in the army during World War II. “I just assumed that since he was an officer, he was college-educated, but he was not,” my grandfather said. “I had a hard time knowing how to handle being his boss [given his high military rank], but he was a very gracious guy and helped me through it.”

With rapidly advancing technology, the Saturn V was constantly being adapted as NASA hurried to complete test launches. “We were learning things all the time,” my grandfather said, and it was mostly by trial and error. The pure oxygen environment in the crew module caused a fire during a test launch and three astronauts died trying to open the escape hatch. A year later, a hose connecting a sphere of liquid oxygen to the rocket snapped, spilling down from the stages and onto the launchpad, prompting a 36-hour lockdown in a bomb-proof room in the base of the launch tower.

To address this, NASA sent its employees to Fuel School to teach the dangers of pure oxygen and changed the crew module environment to include nitrogen. An escape route was added, by which the astronauts could run out of the module during a faulty launch, jump into a slide at 310 feet above ground and land in a rubber room located in the base of the Launch Umbilical Tower, literally bouncing off the walls to break their fall.

Life at the Kennedy Space Center was prescribed by a never-ending series of protocols. There was an intricate communication system based on telephony called “the Net,” and everyone wore headsets to stay in touch with co-workers on different channels. Each department had its own call sign—“networks” for my grandfather’s crew in the IU, “fido” for the Flight Dynamics Officer, “arso” for the Range Safety Officer. Come launch time, a script was used to determine when each person should speak on the Net during countdown and what should be done when.

Scripts were also used for disassembly after a test launch, from de-fueling “the bird” to shutting down high-energy equipment in the IU. The script had the crew in the IU cleaning up from test launches in a way that wasn’t intuitive. My grandfather suggested a revision to the protocol that would improve the electrical system’s reliability. This idea resulted in von Braun awarding him the George C. Marshall Award for Manned Spaceflight Awareness. “That was kinda cool, but [my suggestion] was really something very simple,” he said.

As countdown demonstration tests morphed into true mission launches, the Russian threat remained omnipresent. “We were very scared of the USSR being much more capable in space than we were,” my grandfather said. “We were all required to get security clearances and sworn to secrecy.” When his wisdom teeth needed to be removed, my grandfather had to receive approval to go under general anesthesia before making his appointment with the oral surgeon. “I was accompanied by a young airman to make sure that the dentist did not extract information as well as teeth.” The obsession with secrecy was generally deemed excessive. “The common thought was, ‘what’s the deal? This is pretty simple stuff.’ Maybe [it was to] keep the Russians from laughing and hurting themselves!”

When the Apollo missions began launching, the public became infatuated with the astronauts that represented them in space. Thirty-two astronauts were assigned to the Apollo Program, the most famous including Neil Armstrong, Buzz Aldrin and Alan Shepherd. But to my grandfather, who ate lunch with them in a small cafeteria at the base of the Launch Umbilical Tower, “they were just guys.” That is how he describes everyone he worked with at NASA—simply people. He appreciates the magnitude of what they accomplished but doesn’t seem to share the awe that normal Americans felt when watching the Apollo missions. To them it was magic, but to those who worked on the Saturn V every day for years, it was just science, math and engineering. It was their work, and the astronomical results were proof that they’d done their jobs well.

My grandfather left NASA in 1968 and didn’t look back. “I wasn’t very interested in [following the rest of the Apollo missions], for some reason,” he said. In the end, my grandfather was just one of 300,000 people who contributed to the Apollo Program, sending men to the moon with less computing power than an iPhone. It was a mammoth endeavor that united a country exhausted by war and severely divided by the Civil Rights Movement and the hesitance to extend opportunities in the workforce to women and minorities who deserved them. Fifty-five years later, we are just as divided and face many of the same issues, but with four astronauts newly installed at the International Space Station, maybe Americans can once again find common ground in the renewed effort of space exploration and the wonders of the universe. 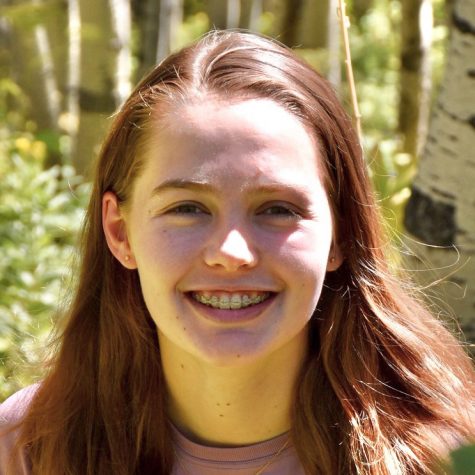 Elliote Muir is a senior and is very excited to join The Owl for her last year at Boulder High. Having loved creative writing since she was little, and as an avid skimmer of The New York Times, Elliote is thrilled to get the chance to learn more about journalism this year! When Elliote isn’t in school, you can find her captaining Boulder High’s mountain bike team, skiing, waiting for the next season of The Great British Bake Off to premiere, playing with her dog, and adventuring in the wilderness with friends and family. As a self-proclaimed foodie, Elliote loves cooking and baking (but mostly baking) and trying new foods. Her favorite food—okay, her favorite meal—is her dad’s homemade...

2 Responses to “The Space Race: A Family Story”

If you want a picture to show with your comment, go get a gravatar.