DeSantis & the Concept of “Freedom” 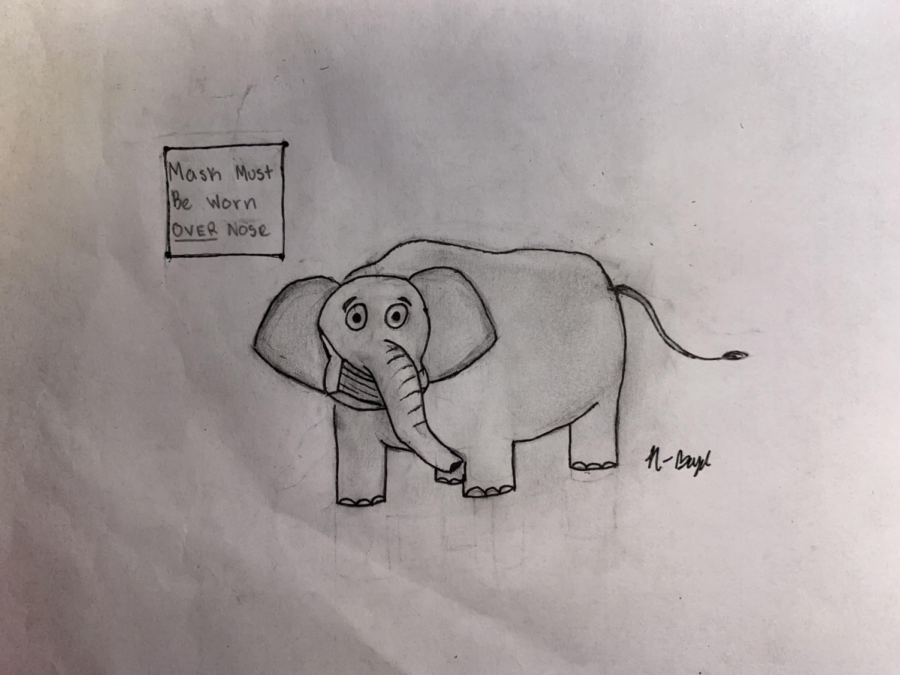 If freedom is the piece de resistance of the Republican argument, then social liberties are the glaring bright red elephants in the room. Cartoon by Norrie Boyd.

On August 27th, a Florida state judge ruled against Governor Ron DeSantis’ statewide ban against schools imposing mask mandates. This is only the latest development in a series of national debates on public freedom vs. safety, and yet another example of DeSantis’ skewed priorities.

DeSantis has persisted with his anti-science views throughout the pandemic, which has proven to have direct implications on the public. According to a report by John Elflein, as of September 1st, 14% of Floridians had contracted COVID-19, a higher percentage than California (11%) or Texas (12%). As stated by The New York Times, Florida currently has an average of 263 daily deaths and 16,000 hospitalized COVID-19 patients, its highest in the pandemic. It becomes a prominent issue when the statistics show that the general population cannot take care of themselves on their own accord.

Amidst these deaths, DeSantis has employed a traditional Republican attitude of “freedom” in his justification for his actions. In a conference this past July, he proclaimed “Floridians are free to choose — and all Americans should be free to choose — how they govern their affairs, how they take care of themselves and our families.”

The Republican Party (GOP), of which DeSantis is a 2024 Presidential hopeful, values this idea of freedom highly; in fact, the first thing that comes up on gop.com is a large, star spangled e-banner declaring “Freedom Matters.” Yet their version of idealized liberty hinges on a specific quality: whose freedom matters.

The most poignant example of this is reproductive rights. On September 1st, Texas officially implemented a stringent anti-abortion law that lets a citizen sue an individual for conducting an abortion past the first 6 weeks, and even goes as far to let a lawsuit occur after someone helps “aid” an abortion after that time period (by, for instance, giving a car ride to a clinic). Clearly, bodily autonomy (and most often, women’s bodily autonomy) is not included in that freedom DeSantis describes in an interview with a local newspaper.

That sense of freedom also does not, for instance, apply to teaching Critical Race Theory (CRT) in schools- in fact, a parental movement has even suggested that teachers should wear body cameras in order to monitor if the subject comes up. Freedom, as defined by the GOP, is a selective word. It does not apply to transgender children playing sports, or Black people having equitable voting rights.

The failed policy DeSantis paraded illustrates a great fallacy of the GOP’s argument: the idea that political and economic freedom, even if more legitimate than social freedom, are isolated realities. Whether it be by misinformation, fear, or just pure selfishness, the individual’s decision to not wear a mask isn’t a choice in a vacuum- it’s one that affects everyone the individual interacts with.

The hypocrisy of so-called “individual freedom” isn’t just a byproduct of the pandemic. Conservatives have refused funding floodplain research following increasing natural disasters, refuted regulation of toxic chemicals, and denied gun control, all the while citing individual and economic freedom. How can there be economic freedom if, according to the CDC, guns kill over 11,000 workers a year? How can there be individual freedom if affordable housing was built, with foresight, in the path of climate catastrophe?

Fannie Lou Hamer, a 20th century activist, used the phrase “nobody’s free until everybody’s free.” While ideas of collective liberation seem a long way away from entering the GOP’s platform, the reality of Hamer’s statement is clearest in the context of public health. By letting his constituents have a decision in wearing masks in schools, DeSantis effectively puts lives at risk, and infringes on everybody’s freedom.