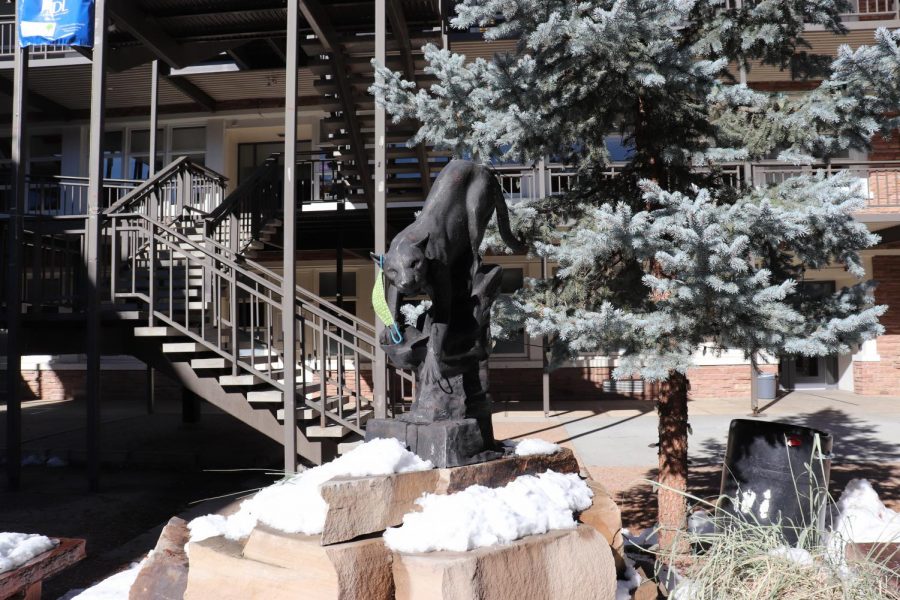 Officer Brent Biekert will be Boulder High's last School Resource Officer as BVSD plans to discontinue the program in early 2022.

After eight years of policing at CU and 19 years with the City of Boulder Police Department, Officer Brent Biekert decided it was time to try something new. Being a School Resource Officer (SRO) “appealed to me because it was different,” Biekert said. He has served as Boulder High’s SRO for the last four years.

SROs were initially introduced into schools in an effort to limit school violence and improve students’ relationships with law enforcement. “It’s evolved,” Biekert said. “Our department puts more of an emphasis on the mentor and teacher part [of the job] rather than just hammering kids with tickets.”
“This isn’t about arrest stats and ticket stats; it’s about helping kids through difficulties. I try to be a resource to help them through that. [This approach] is more challenging and it’s more rewarding.”
In addition to his policing duties, Biekert wants to get to know as many students as possible and “one way you get to know a huge amount of kids is by coaching sports.” Despite having little coaching experience, Biekert began working with the football, women’s basketball and track teams soon after he arrived at Boulder High. The positive relationships he’s built with athletes are visible when they interact during the school day, and Biekert feels that this makes him more approachable to all students.

“I went through the [Boulder High] directory one time and I think there were 600 kids that I knew by name and face,” Biekert said. “I’m here to protect you as best I can but I’m also someone you can come to if you need help. I want kids to be able to say, ‘I need to talk to somebody about something…I’m gonna go to Officer Biekert’s office and he’ll talk with me.’ I like to be a guiding force to push [kids] in a better direction.”

Prospective SROs are required to attend a national week-long training before entering schools. “You already know the law enforcement part of being a cop,” Biekert said. “They emphasize the mentor and the teacher part, and [how] to be an influence for good.” The training is largely meant to shift officers’ mindsets from enforcer to educator and prepare them for entering a school environment. “This is different from any assignment [an officer] has ever had,” Biekert said.
“It’s almost a 180 change in focus. A street cop takes pride in getting the bad guys off the street. Here, there aren’t really any bad guys.”
Per an agreement between BVSD and the City of Boulder Police Department, SROs serve terms of five years. Biekert, whose term will be up in January 2022, will be Boulder High’s last SRO. In November 2020, the BVSD Board of Education voted to discontinue the program in all schools by early 2022 in order to “address disparities in school discipline.”

While the SRO program seeks to foster trust between students and police that will continue into the outside world, BVSD statistics reflect a nationwide pattern of students of color receiving a disproportionate amount of tickets and arrests issued in schools. (Summonses are most commonly issued for incidents involving marijuana, alcohol, disorderly conduct, drugs, assault, trespassing, harassment, theft and damage to private property.)

BVSD’s SRO program has been under review since June 2020, when the District Accountability Committee (DAC) and Equity Council began preparing recommendations for the program’s cessation. In addition, they recommended that the district increase the presence of mental health professionals in schools, provide bias and anti-racism training to all staff and create committees of BIPOC and LGBTQIA+ students, staff and parents to help “address larger systemic school safety and equity issues.”

Members of the DAC and Equity Council recognized that “the problems we have do not originate from SRO officers.”
Rather, SROs “have never been really trained to do the work” that is needed to counter the systemic racism and disproportionate disciplinary targeting of students of color that has long been pervasive in America’s school systems.
Officer Biekert expressed disappointment at the SRO program ending. “I just think it’s not a good idea to kick [SROs] out of schools,” he said. “We can have a positive impact on kids.” He refuted the idea of BVSD SROs contributing to the school-to-prison pipeline (another reason for the program’s cessation), saying “I don’t know of a department where their emphasis is to arrest as many kids as they can. That doesn’t help anything.”

During Biekert’s tenure at Boulder High, every student who has received a ticket was sent through the Diversion Program, a partnership with the juvenile division of the Boulder County court system. “They never see a judge, they’re not entered into any system, they don’t have a record and as long as they complete the tasks that are set for them—whether it be counseling or apology letters—once they complete those things, their whole case file is just gone. They don’t have a criminal record. I think it’s a great opportunity to give kids a second chance.”
“We have a very diverse school with groups of kids that don’t have good relationships with the cops. I want them to see that at least there’s one cop in this city, in this department, that [they] can trust, that [they] can talk to.”
Returning to in-person school after nearly a year of online learning, Biekert found that many of the students he’d come to know over the years seemed dejected, struggling to cope with the toll that the last year has taken. Wanting to lend some encouragement, Biekert wrote a letter to Boulder High students, The Owl’s first letter to the editor of the 2020-21 school year.

With under a year left in his term as Boulder High’s SRO, Biekert hopes to have been a positive force in redirecting students who were off track. “[Those students can say], ‘When I was in high school, I was heading down [a bad] path but this cop, I don’t even remember his name, he got involved and he tried to shift my focus and without him, I probably would have been in prison.’ That’s the goal I have.”

Even after the SRO program ends, BVSD will continue to work with law enforcement to ensure general campus security at schools. While Biekert is close to retirement, he will likely go back to patrol in January 2022 and plans to bid for the area including Boulder High. “I’ll still try to be present,” he said. “I think they’ll have a place for me [at Boulder High], whether there’s an office or not where I can still come and assist with things. They’ve all got my phone number.”