Bringing Back the Saddle Shoe 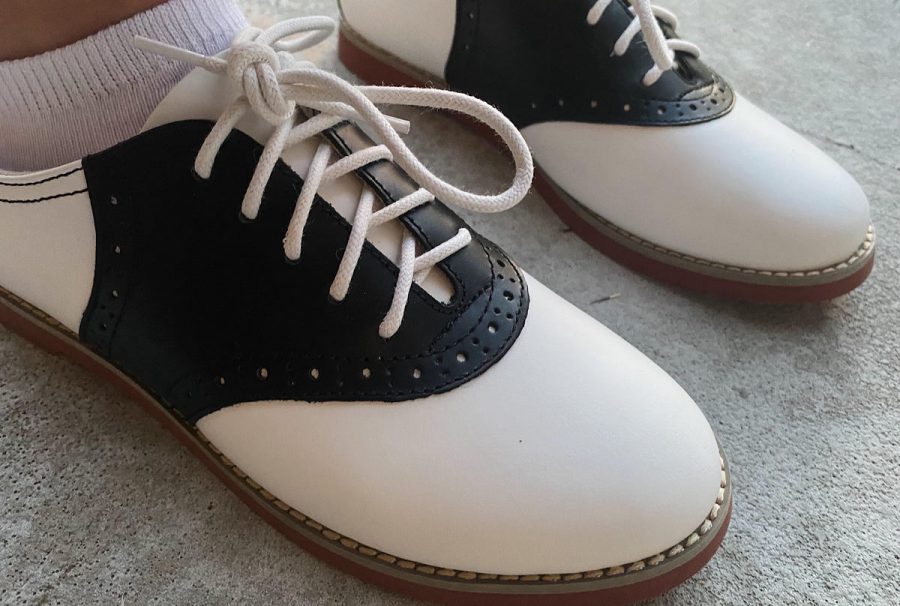 In the year 2020, after almost a decade of the Saddle Shoe declining in popularity, I have decided to bring them back.

If you are anything like me and love to watch TV shows and movies set in high schools during the 1950s-1990s or the early 2000s, you have probably noticed one common shoe worn by many teenage girls: the saddle shoe. After noticing this iconic shoe multiple times, I asked my mom if she remembers this shoe to be as popular as portrayed. She told me yes and that she even had a pair of her own. I have been quite intrigued with this shoe and, more importantly, why no one wears them anymore. It’s understandable that with fashion trends changing weekly, a shoe can go unnoticed. Still, the saddle shoe has been iconic for over 50 years and you would think it would be in every vintage collector’s closet, but it seems that they are mostly worn as part of a 1950s costume. This year, however, I decided to bring back the saddle shoe. After years of watching Gilmore Girls, where Rory Gilmore wears her saddle shoes with her Chilton uniform, and now recently watching The Queen’s Gambit, where saddle shoes are worn throughout the series, I am finally adding saddle shoes as a unique addition to my wardrobe that I am excited to style.

Wearing clothes that are either out of style or not currently trendy can bring up some anxiety and hesitation. While attending school in person, I always felt judged for what I would wear to school. Either your clothes are “too basic,” or they are too out there. During the pandemic alone, I feel as though I have gone through different phases of outfits—going between leggings and a sweatshirt to occasionally wear a dress and heels only to walk around my room and get ready for the first time in months. Many of us have felt the pressure to look a certain way, but I have been letting myself wear what I think looks cool whether or not it fits the generic style—this mainly consists of sweater vests and corduroy pants. When buying clothes that I want to feel both comfortable and stylish in, I figured I might as well get the pair of shoes I have been interested in for so long, even if they are not back in style.

I’ve never understood why the saddle shoe has stopped being so popular. I wanted to learn more about the history of the saddle shoe, and what I learned was quite surprising. Although they became extremely popular in the 1950s, the saddle was first made notable in the 1920s as men’s loafers. During this time,  women began fighting for gender equality and bending the norms of women’s fashion, and the saddle shoe became footwear for all genders. The first time the saddle shoe’s popularity dipped was during the Great Depression. Later, the shoe became more durable while its price remained low, with more colors offered as well. The 1940s were when the saddle shoes finally began to take form into what they are today.

Many teenage girls began wearing the shoes to school and the shoe’s popularity increased significantly. The way to wear them was scuffed and worn-down, unlike the 1940s, the 1950s when it was a time to show off a nice, clean new pair of shoes. Wearing saddle shoes to school to show them off and be a part of the crowd was common. Not only was the saddle shoe cute, but they were also extremely comfortable and were a part of the standard cheerleading uniform until the mid-80s. The saddle shoe then did fall in sales again due to the decade of rebellion during the 1960s. The saddle shoe declined until the early 2000s, when it made almost an entire halt in sales.

I have been waiting for the saddle shoe to come back for years, and since no one else has brought them back, I decided to get a pair and wear them anyway. They look similar to the Dr. Martens Oxford shoe as well as the Adidas Superstar, which have been back in fashion in recent years. The most important lesson I have learned over the past few years is that you should truly wear what you feel comfortable with, as long as it is not hateful towards anyone, religion or culture, even if it is not trendy or in style. Getting to the point of not caring what others think about what I wear has been years in the making. Still, I am excited to wear my new pair of saddle shoes, and if you are interested in getting a new pair of comfortable and cute shoes, I would recommend the saddle shoe, and we can bring them back together!