Is Disney+ Just a Cheaper Netflix?

Is it just a cheaper Netflix? A dive into the new streaming service and its offerings. 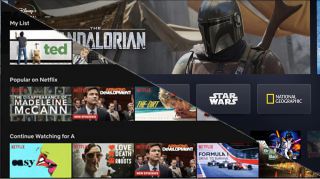 The release of the new Disney+ streaming provider has sparked debates over its similarities with competitor Netflix. Disney+ vs. Netflix. By Henry St Leger(via techradar.com).

Disney+ is the newest addition to the many options for video streaming services. It features the long-awaited Star Wars show The Mandalorian. It also includes every episode of The Simpsons, all movies and shows produced by Disney and Pixar, the entire Star Wars collection, the Marvel Cinematic Universe, and every 20th Century Fox movie and National Geographic film. To make this sweet deal even better, it costs only $7 per month, which is relatively cheap when compared to its competitors in the world of streaming services like Netflix ($12.99 per month). You can add Hulu and ESPN+ to your Disney+ package for an additional $6 a month. For reference, a standard Hulu subscription itself is $6 a month, not including ESPN+. Additionally, the layout of the app is visually pleasing, with a dark theme that seems to be popular these days. It also has a very clean and familiar look due to all the icons having rounded edges, and there aren’t any pop-ups. I also like how it is very easy to navigate with a banner at the top having the main categories like Marvel, Star Wars, and Pixar. If you can’t find what you are looking for up there, then you can search for whatever you want in the search menu. It is also convenient because if you want to watch these movies and shows while on a road trip or a long flight, then you can download a few shows or movies. Although the app looks very good, the aesthetic is very similar to Netflix. A lot of people are noticing the similarities between Netflix and Disney+. They share some of the features stated above, just different color schemes. One would argue that you are buying Disney+ for the content, and if people like Netflix’s layout, then why would Disney bother making something different from that?

According to Disney, on the day of the app’s release, over 10 million people logged on, and Disney+ started to experience very slow speeds; while it didn’t technically crash, these connectivity issues rendered the app effectively unusable. Along with that, people have had various technical issues with the app. Some are having trouble adding shows to their list, some are having issues opening a particular movie or tv show, and others are having trouble opening the app at all. I would not worry though, as according to one of Disney’s representatives, this won’t be an issue for long because Disney’s developers are currently working to adapt the app to be able to handle its extremely high demand.

I think that Disney+ is a good buy because of the very cheap price, even if you don’t plan on using it on a day-to-day basis. At first, I thought that this app would only appeal to Marvel fans, Star Wars fans and families with younger kids, but in actuality, Disney+ has shows and movies for everyone.